Ronnie Whitelock, one of our best loved and respected life members passed away in Hospital late on Friday the 7th of December with his family around him.

Born in 1932, Ronnie joined Victoria Park at Scotstoun as a junior in 1947.  He was clearly an exceptionally talented sprinter and he was quickly promoted to the senior squad where he was coached by the late Willie McFarlane. 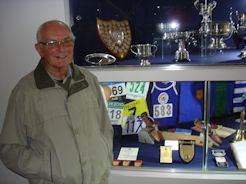 early years, he served his apprenticeship at John Browns shipyard before securing his long term future in the drawing office.  It was there that his colleagues fashioned a set of starting blocks from a 4”x4” block of wood and two off cuts of aluminium.  Those very starting blocks were used throughout what was to become a very illustrious career.

In his early career, he enjoyed success at the Rangers Sports, the Police Sports and a variety of Highland Games at the then venues of Ibrox Stadium, Hampden Park, Helenvale and Westerlands.

In 1956 he was part of the winning Victoria Park 4x110 yards relay team at the Scottish Championships in Meadowbank.  The team was Alan Dunbar, Bobby Quinn, Harry Quinn and Ronnie.  This group became lifelong friends and up until quite recently they would meet regularly and rib each other about past glories.

1957 was probably his best year on the track, winning gold at the Scottish Championships over 100 yards with a time of 9.8 seconds, winning gold in the 4x110 yards relay, competing for Scotland and competing for Great Britain against Russia at White City.  The latter earning him life membership of Victoria Park.

He went on to win two more Scottish sprint 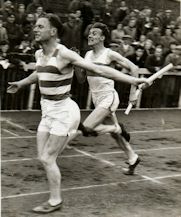 titles in 1959 and 1962.  He was a member of the winning Victoria Park 4x110 yards relay teams on four occasions and represented Scotland in at least four international matches.

Once his successful career as an athlete was over he continued as a coach for many years and many younger athletes benefitted from his experience.  Ronnie had a great sense of humour and he was always popular with the youngsters.

He was still officiating last winter within the Kelvin Hall and he was present at Victoria Park Glasgow’s last but one agm.

His last trip to Scotstoun was in October this year to see the Club’s newly completed display cabinet.  Thanks to his generosity, the centre piece of the display is those very same starting blocks which were made for him in the 1950’s with his handmade leather running shoes in situ. Everyone who knew Ronnie said he was a lovely kind man “a gentleman”.  He’ll be greatly missed by all.

His funeral will take place at 3pm on Thursday the 13th of December at Clydebank Crematorium.  All friends and club-mates are invited to join his wife Irene, son Donald and daughter Elspeth for the service.  The family have requested no black ties.  Club colours would be a nice touch.

It is with much regret that we have received the sad news that one of our longest standing members, Jimmy Christie, has passed away at the age of 82 years.  Jimmy had been in hospital for some weeks, having suffered a number of strokes from which he failed to recover.  Jimmy first joined Victoria Park on the 28th May 1946 and was still competing in July 2012 at the grand age of 81 years throwing the Javelin and Shot Putt in Dunfermline at the Scottish Athletics Masters’ Championship.

During his years of membership of Victoria Park, Jimmy was involved in most aspects of volunteering within the Club – Coaching, Team Managing, Officiating and sitting on the Committee as Vice President and President for a period of time in the late 60s-early 70s.  It was in the early 70s that Jimmy began competing as a Veteran athlete and clearly enjoyed representing his club in Pentathlon events and taking part in Glasgow Marathons and Half Marathons.

He was also a long time member of the Scottish Veteran Harriers Club.  His boundless energy would have been a credit to people half his age and Victoria Park City of Glasgow will be made poorer by his passing.  He has been a true role-model.

Jimmy was a very recognisable figure within the Scottish Athletics community and will be sadly missed by all who knew him.  Our sincere condolences go to his family and friends.