Our men went into the 4th match of the Scottish Athletic League at Grangemouth on Saturday the 31st of August knowing that two out of three clubs in the drop zone would go down and that we had to beat both Falkirk and Corstorphine on the day to survive in Division 1 for next year. It soon became clear that Falkirk had mustered a superstrong team, which threatened champions Aberdeen throughout the afternoon, while we held third for a while but gradually slipped as we were unable to cover all events. We finished 5th equal on the day but 8th for the season, so it's Division 2 competition next year.

Despite our disappointment there were good aspects, as all of our 12 athletes gave their best and we achieved some fine results. David Wilson, for the second time this season, was our top points scorer with 38. Our two league debutants did us proud. Jamie Stevenson took 2nd B 100m in 11.19 secs +5.0mps and 2nd A 200m in 22.77 +2.4, fine sprinting though wind assisted. Neil McLean, one of Tommy Boyle's coaching group, fulfilled his promise by surging past the fancied Aberdeen runner to take the A 400m after fighting a punishing wind in the middle 200 to win in 51.57. We had 5 A string winners (eclipsed only by Aberdeen) and one clean sweep (Discus). Lewis McGuire had a fine High Jump win with 2.10m, before unsuccessfully attempting 2.14m, which would have equalled his own Div 1 record.

We went out with a bang in the second last track event, the 4x100 relay. Jamie led us off superbly, a good change to David put us in a clear lead down the back straight, then Chris Boyle took the baton cleanly and consolidated round the bend. The change to Niall, who is not used to relays, was not the slickest, but once he knew it was safe he showed his class to hold off Aberdeen to win in 44.32. This was our most satisfying, if surprising win of the day and the time was affected by the strong headwind in legs 2 & 3.

Other results not noted above were:

As usual we were well supported by coaches, parents and family. Thanks to all on a windy and wet (at the start) day, with special note to our officials Sheila (Field Referee) and Hugh Baillie and Susan Miller 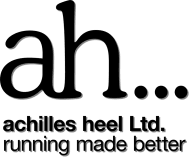